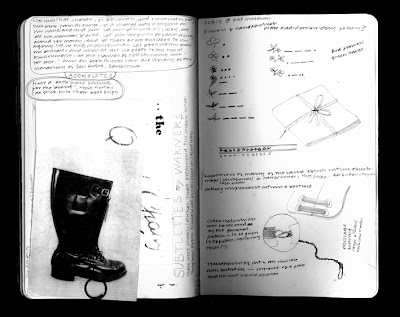 Clayton Hutton worked for MI9 designing and manufacturing escape aids for RAF officers fighting in enemy territory during WWII. These escape aids fitted into two categories: those which were 'pre-capture' devices and those which were surreptitiously sent to POW's in camps through a network of fake organisations.

This page from my sketchbook illustrates two designs.

The first on the left is an image of a design for a new flying boot. Hutton heard many complaints about boots from airmen returning to Britain. The boots became wet in damp weather and caused swelling in the feet and legs when marching for any length of time in dry weather. At all times they were noticeable because of their distinctive appearance.

The new escape boots contained a tiny blade in a cloth loop at the top of the boot, allowing the wearer to detach the bottom part, thereby creating an ordinary walking shoe. The leather-lined top half could be used to form a warm winter waistcoat. The laces also contained a powerful 'Gigli' saw and within the cavity of the heel were hidden silk maps, a compass and a small file.

On the right are sketches made whilst at the RAF Museum in Hendon. Here, I was shown the original artworks commissioned by Hutton for a pamphlet entitled 'The Quick Change Act', issued by MI9 to all officers. One item was an illustration of handkerchiefs wrapped in floral ribbon. It transpires that each combination of flower and leaf on the ribbon represents a letter of the alphabet in Morse code. Although there was no further information about precisely how this would have been used, I imagine that it would have been included in packs sent to POWs, alerting them to escape aids hidden elsewhere, either within the parcel, or on their own person.