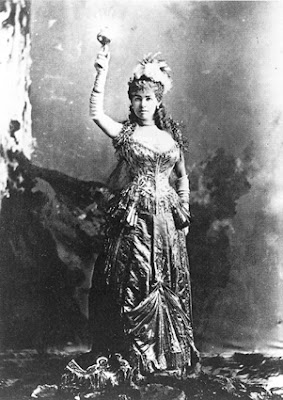 Mrs Cornelius Vanderbilt photographed in 1883 wearing an ‘Electric Light’ ballgown, designed by Frederick Ward.The ballgown, made in blue velvet and satin contained a tiny battery inside the bodice of the garment, off which miniature lamps set into the material of the rest of the garment were run. (Read more in Artificial Sunshine: A Social History of Domestic Lighting; Maureen Dillon; 2002).

In the 1880’s, excited by the novelty of electricity, personal electrical adornments became popular, initially for the stage but later as a fashion accessory. See below. (Read more in Like A Glow Worm Who Had Lost Its Glow: The Invention of the Incandescent Electric Lamp and the Development of Artificial Silk and Electric Jewellery; Maureen Dillon; Costume No.35; 2001) 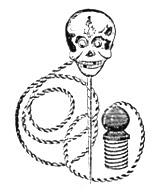 Source: Like A Glow Worm Who Had Lost Its Glow; Maureen Dillon; 2001
Mrs Gordon, one of the first to wear electric jewels, described the perils in 1891 in her book Decorative Electricity:

Sometimes the battery heated, and leaked, and once I well remember, the old lamps having worn out, I had some new ones given to me that were a wrong resistance for the battery. It heated, and we barely had time to cast the battery into the bath before the gutta-percha sides gave way, and the acids poured out, taking off all the paint. So having spoilt a dress, a carpet, and a bath, I abandoned personal electric light decorations.