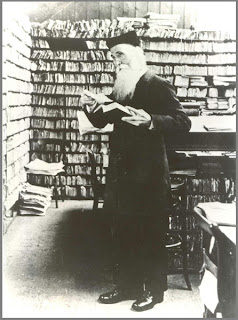 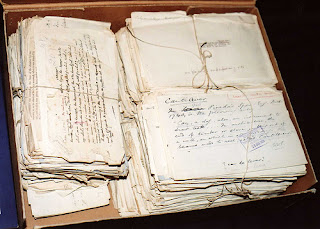 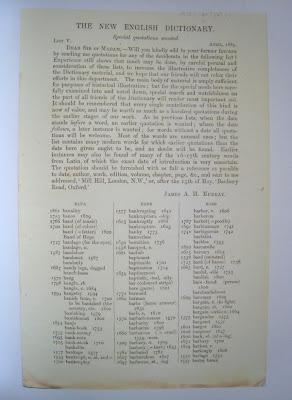 Tomorrow I'll be doing a short tour of The Art of Lost Words at Peninsula Arts and talking about the project In Absentia I created for it. I'm currently revisting this project for a new body of work and I keep returning to the epic nature of the creation of a dictionary. I resolved to find out a little bit more about the history of it.
James Murrey, the principal editor of what is now known as The Oxford English Dictionary, in his scriptorium is shown in the top image. The project began in 1879 and was anticipated to take 10 years to complete. After five years, this schedule had to be revised when they had only made it from 'a' to 'ant'. In the end it took 44 years to finish the whole book and it appeared in 12 volumes in 1928.
Murrey invited people from all across the English-speaking world to contribute words, meanings and quotations, particularly for the earliest uses of words (see bottom image: a circular sent to 'the friends of the Dictionary'). All citations were meticulously recorded and archived (see middle image) and Murrey noted that the meanings of existing words were always changing, necessitating in an almost constant re-examination of the dictionary's entries. Murrey never saw the completion of the first edition.
Posted by Miss Ridout