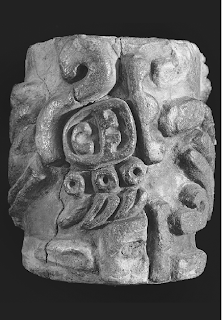 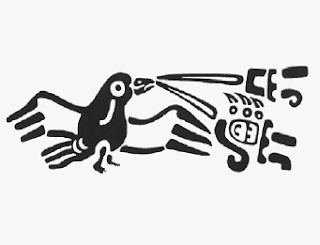 Part of the proposal for the residency at WSW is to write an article about the history of speech and thought balloons. I've been researching the subject for quite some time now and it's really pretty amazing the stuff you find out there. This goes back a long way. Looks like a trip to South America might need to be on the cards in the future…

In 2002 Mary Pohl and a group of archaeologists working in a site in San Andres in Mexico, discovered a ceramic cylinder with images carved into it. The ceramic cylinder (top image) is believed to have been a roller stamp or seal. When it was rolled in ink or dyes, it could be used to print the symbols from its raised carvings onto cloth, or even human skin as a kind of body decoration (bottom image). Scientific testing suggested that the cylinder and other artifacts found nearby dated back to 650 B.C. The images on the cylinder are considered to be glyphs, figures used as symbols to represent words, ideas, or sounds.
When inked up and rolled out, the image depicts a bird with lines streaming from its beak. The lines connect the bird’s beak to two symbols that appear to be the bird’s dialogue. This concept is called a speech scroll. Speech scrolls resemble dialogue balloons used in present-day comic books and cartoons. Speech scrolls were widely used in later Mesoamerican writing to depict dialogue.
In other examples, speech scrolls are decorated with devices that describe the tone of the speech. So for example a ruler's speech could take the form of a serpent. And a Spaniard's speech scroll in a 16th century is decorated with feathers to denote "soft, smooth words". The depiction of knives indicate a verbal attack on one person from another.
To read a detailed article on the Olmec stone roller stamp, download the pdf here.
Posted by Miss Ridout