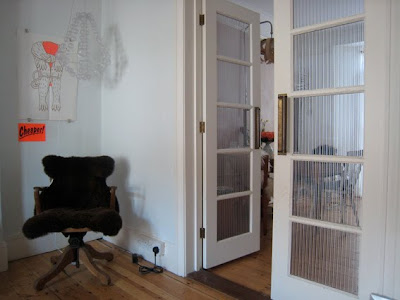 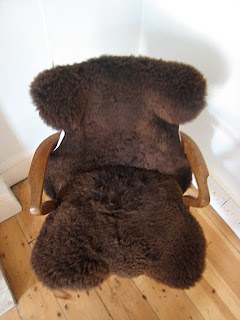 I found this chair several years ago at the tip and bought it for a fiver. It needed a lot of sorting out but it was already clear that it was a gem. When I took the rotten padded seat out of it I discovered amongst the horse-hair stuffing a cheap fake-gold necklace. Odd that it was tucked away in there when it clearly wasn't valuable, and there's no way it just drifted there by accident: it was absolutely placed with intent.
After some investigation I found out that it was an old sea captain's chair - it rolls back on it's axis (rather squeakily) and would have been used in a ship's bridge.
This weekend when I removed the sheepskin on it to give it a dust, I discovered that it was covered in salt. The marks all over it looked like the trails of tears. Very mysterious. I've oiled it now, so we'll see what happens next.
Posted by Miss Ridout