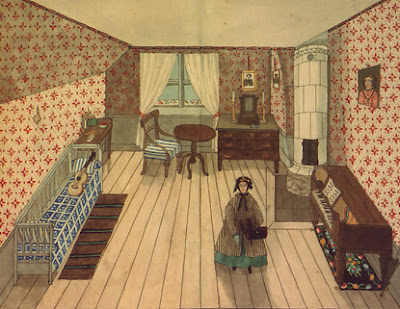 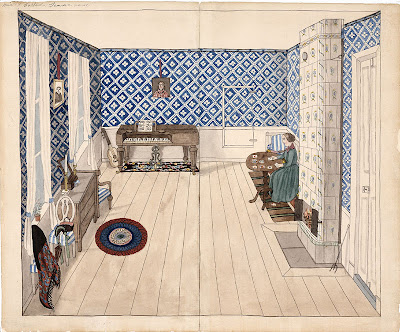 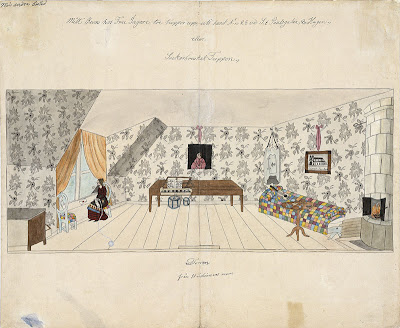 A few years ago I made a series of drawings of my bedroom, by sticking large sheets of paper across one wall and then drawing everything I could see at the other end of the room, to scale. Because I was doing most of it whilst drawing with my left-hand, the drawings have slightly odd perspective to them - they looked flattened somehow - and have a naive quality. Several homes later and they've been misplaced, but I was reminded of them when my friend introduced me to the work of Josabeth Sjöberg earlier this year.

Also known as 'Mamsell', Sjöberg (1812-1882) was born in Stockholm to a father who was an office worker and who educated his only daughter in art and music at home. Her parents both died when Sjöberg was in her early twenties and as a result it was necessary for her to earn money through being a music governess. Like many women of that era, Sjöberg occupied herself in her free time with 'feminine pastimes'. Her interest specifically became drawing and painting her surroundings. The rooms that she and her students lived in, the view of the landscape from her windows and the people she experienced around her, carrying out their day-to-day are the main source of inspiration for her work.

It's been virtually impossible to find anything about her in English on the web, but there is a book (now out of print, and available at vast - or occasionally modest - expense from Amazon or Abe Books) called Josabeth Sjöberg: Målarmamsellen från 1800-talets Stockholm : en komplett bilderbok. It's well worth a look if you can get hold of it through a library, despite all being written in Swedish. It thoroughly documents the various series' of works by Sjöberg including the same room viewed from several different angles and some of the domestic and public spaces she spent time in in her later years. These images provide both a rich historical resource documenting the 19th Century middle-classes, but also offer a very private view of some of the more intimate details.